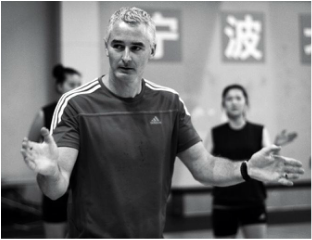 Greg is also an instructor for various performance and rehabilitation courses and workshops internationally.

Greg is a certified and experienced hardstyle kettlebell instructor.

His standing in the industries of rehabilitation, exercise and sports performance saw him recruited as the only non-osteopath on the Clinical Leadership Committee for Sports Osteopathy Australia.

Greg is an industry writer for Breaking Muscle and OTP Books.

He completed a Bachelor of Science (1996) and a Bachelor of Physiotherapy at the University of Melbourne in 1999, competing for the university as a track sprinter. As a consultant clinician and injury risk advisor to the Australian and British Defense Forces in Australia and Europe, Greg refined tactical and sporting injury management. To transition to national and international level sports physiotherapy, Greg completed a Masters degree in Sports Physiotherapy out of Latrobe University in 2008. He worked full time in football for 2 years before being recruited to the position of Sports Medicine Coordinator at the Northern Territory Institute of Sport in Darwin, Australia. Greg's experience in this and other roles, as well as experience with achieving outcomes with the Functional Movement Screen and Selective Functional Movement Assessment, was seen as an asset in international sport, so he was recruited, in 2014, to head the Performance Physical Therapy service for EXOS at the Shanghai Research Institute of Sports Science, Shanghai, China - training national court handball players, track sprinters, throwers, gymnasts and distance runners. In 2015, he was recalled to China to help manage the China Women's Volleyball team as they prepared for the 2015 World Grand Prix tournaments, culminating in victory at the 2015 FIVB World Cup. ​

Click here for Selective Professional Courses and Conferences attended and taught at.
Copyright © 2015